We use VCD spectroscopy to show that a single water molecule determines the conformation of azithromycin even in CDCl3 solution. Congrats to Daniel on the second exciting paper in ChemCommun from his postdoc time in Bochum. Read more.

Congratulations to Michael on his first paper! An exciting example for the use of VCD spectroscopy for stereochemical characterizations – great job! Read more about it in Angewandte Chemie!

October 2020
On the cover of EurJOC

Proudly presenting the front cover of EurJOC highlighting our minireview on the applications of VCD spectroscopy for the characterization of asymmetric catalysts. It is part of the #YourJOCTalents special issue. The paper and obviously also the cover are dedicated to Larry Nafie on the occasion of his 75th birthday. Read more here.

Daniel’s first paper of his postdoc-stay in our group is out in ChemCommun. In collaboration with the group of Prof. Frank Schulz, we show that VCD spectroscopy can actually distinguish small chemical and stereochemical changes in large and flexible macrolide antibiotics. Read more here!

Christian was invited to submit a minireview on the group’s activities in using VCD spectroscopy for the characterization of asymmetric catalysis to the #YourJOCTalents special issue. It was dedicated to Larry Nafie on the occasion of this 75th birthday! Read more!

… that have been used in the preparation of chiral polymers are reported in a joint paper with the Pammer group from Ulm. Read more….

In collaboration with Tom Vermeyen from the University of Antwerp, we report on the solvent dependence of the VCD spectral signatures of a ProPhe dipeptide and their characteristic secondary structures. Read more…

We just published another study on solvation of chiral alcohols in PCCP and show that solvation effects become negligible with increasing size and structural complexity of the solute. The paper also contains data from our former Bachelor student Katharina Blanke! Read more…

Christian finally got tenured as Heisenberg professor for “Stereochemistry and Chiroptical Spectroscopy”. Celebrations were wild, but we are back at work, promissed. 😉

Recently, Christian has been asked by the editor-in-chief of The Journal of Organic Chemistry to join the journal’s Editorial Advisory Board. A pleasure to serve the community next to all these amazing colleagues!

In Tino’s first paper (Congratulations!!), we show that VCD spectroscopy can be used to characterize the structures of in situ generated enamines of prolinol ethers. Check it out: dx.doi.org/10.1002/chem.201905614 !

December 2019
How to solvate diol for VCD studies?

June 2019
Solvent effects on the VCD spectra of chiral alcohol

Luisa’s first paper is out! In her Masters thesis, she investigated solvent effects on the VCD spectra of a series of chiral alcohols and developed guidelines on how to account for explicit solvation in the computational analysis of the spectra. The results have now been published in PCCP. Congrats!

May 2019
Perspective article on AC determinations by VCD

Christian, Tino and Nora have made some efforts to prepare a review article on AC determinations by VCD spectroscopy. The paper outlines the general work flow and the experimental requirements without going into too much technical detail – the ideal overview for those interested in getting an AC from VCD. In the second part, the article summarizes about 100 examples for AC determination published in the last decade. Give it a read.

April 2019
New job for the community

This month, Christian became member of the editorial board of the Wiley-VCD journal Chirality – the journal for the community of chiroptical spectroscopists, chiral recognition and chiral separations.

This month, we group got three new members and a status update. Kevin finished his Masters (congrats! :D) and stays with us for a project in the framework of the research training group “Confinement controlled chemistry”.

Dr. Daniel Demarque joint the group as Postdoc. He has been visiting PhD student in 2017 and now returns with a prestigious Alexander-von-Humboldt Postdoc Fellowship! Congrats as well!

Michael Kemper joins us as new PhD student. He received his BSc and MSc from the University Duisburg-Essen for work in Carsten Schmucks lab. Welcome to the world of VCD, Michael! 😀

The matrix-isolation technique allows us to study chiral molecules in frozen rare-gas matrices. This is advantages especially if reactive/instable species are to be examined. A thermodynamic equilibrium cannot be reached, tho. Therefore, we developed CryoVCD, a new technique that allows us to record VCD spectra of chiral molecules in liquid rare-gases as solvents. This requires low temperatures (-100°C for xenon) and elevated pressures (3-5 bar for Xe). We have faced the challenges of developing such system and show in our recent PCCP paper that it actually works!

The experiment got the nickname “R2D2”. If you are curious why, feel free to visit us and see R2D2 yourself.

Today Christian has received the great news that he is officially accepted in the Heisenberg programme of the DFG! This is not only a great honor, it also shows a great appreciation of all the group has achieved in the last years! Thank you!

Along with it came a new DFG project on MI-VCD. Yes, we are looking for more PhD students!

November 2018
On the cover of ChemEurJ!

In our recent paper in ChemEurJ, we investigate how carboxylic acids bind to Takemoto’s bifunctional thiourea catalyst Our work got highlighted as hot paper and we got the chance to be featured on the cover of ChemEurJ again!

October 2018
Funding in the Boehringer Ingelheim Plus-3 Programme

We have received the great news that Christian’s grant application in the Boehringer Ingelheim Foundation’s perspective Programme “Plus 3” has been granted! Find out more in the university’s press release and expect exciting results from our studies on chiral recognition through halogen bonding in the near future!
Read more in the university’s press release.

Luisa finished her Masters thesis – Congrats!! – and stays with us for a challenging PhD project in the framework of the Research Training Group “Confinement controlled chemistry”.

On the basis of a comprehensive analysis of experimental and theoretical IR and vibrational circular dichroism (VCD) spectra, we make suggestions for solvation schemes for carboxylic acids. More specifically, we have studied two chiral carboxylic acids in solvents of different polarity and hydrogen bonding capabilities and verify previously proposed solute–solvent structures for their general applicability.

September 2018
The first PhD on VCD from Bochum has defended – Congrats Dr. Corina

Corina successfully defended her PhD Thesis on Sep 28th. Congrats for this nice Piece of work! 🙂 She’ll stay as postdoc for another year or two and continue the work on matrix-Isolation VCD spectroscopy.

Corina won a poster prize (1st place) at the Chirality meeting 2018 at Princeton Univeristy for her poster on matrix-Isolation VCD spectroscopy! Congrats!! 🙂

Our recent contribution to PCCP highlights the surprising performance of the M06-2X functional in the prediction of C-F stretching vibrations and traces it back to a fortunate compensation of Errors.

… after completing their Masters projects in our lab. Congratulations on your wonderful thesis! Tino will work on active conformations of asymmetric catalyst. Nora will take care of the new instrumentation for measurements in liquid rare gases, which she set up during her Masters thesis project, and measure binding enthalphies of halogen bonded complexes. 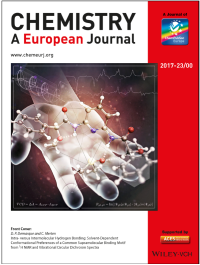 This work shows that the intuitive assumption of the sterically less hindered amide group being solvated preferentially does not hold for the cases of two 2,6-pyridinediyl-dialkylamides. Using vibrational circular dichroism (VCD) spectroscopy, solvation is found to induce significant conformational changes, which are not immediately apparent from 1H NMR data.

The work got rated as “hot paper” by the reviewers and was featured on the front cover of Chem. Eur. J. Read more about it in the Cover Profile or of course in the paper.

Can a supramolecular self-assembled capsule feel the chirality of its guest? In this collaboration with K. Tiefenbacher (U Basel), we show: Yes it can. 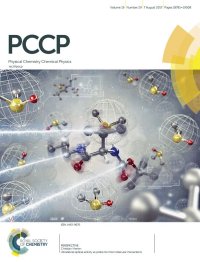 A lot of our studies use stereochemistry as probe for intermolecular interactions. Christian summarizes these ideas in a recent Perspective Article for PCCP, which is also featured on the cover page.

In this PCCP article, we report how different solvents affect the VCD spectral signatures of a chiral carboxylic acid, and show that sometimes even ACN needs to be considered explicitly to reproduce the experimentally observed spectra.

As part of the special issue on solvation of the german chemistry journal “Chemie in unserer Zeit”, Christian writes about the solvation shell around chiral molecules and how it can be affected by the solute.

The chiroptical properties of both the E- and Z-isomer of a champhorquinone imine derivative are studied by means of MI-VCD spectroscopy, which is showcased as a powerful tool for the characterization of the switching states of chiral molecular motors. 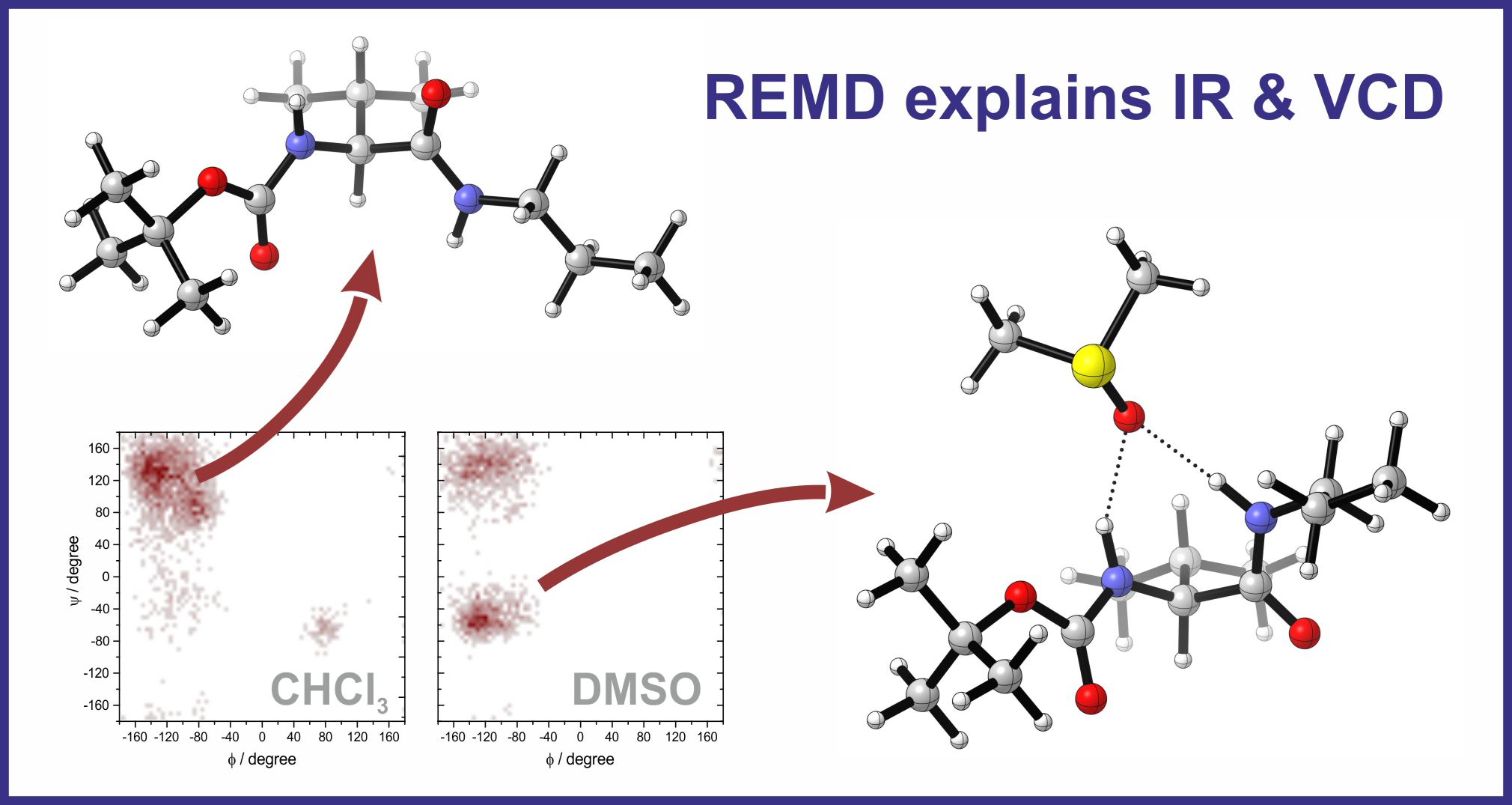 By combining results from DFT and semi-empirical REMD simulations, we analyzed the VCD of an N,C-protected valine. 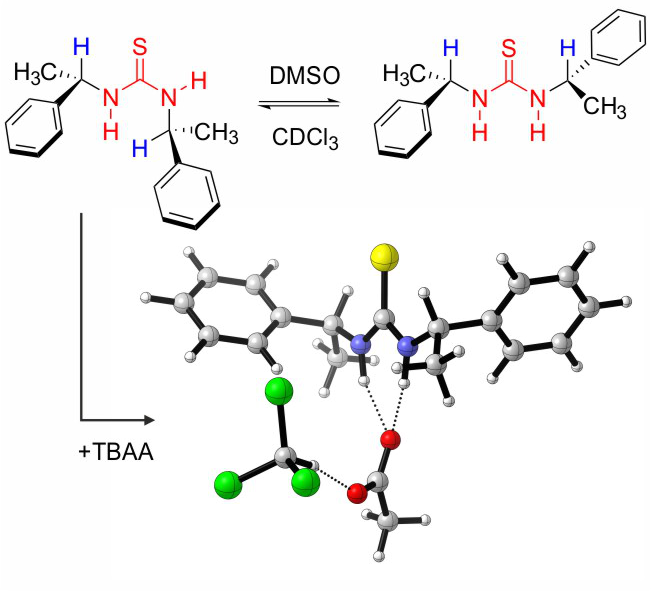 Using VCD, the conformational preferences of a chiral thiourea in different solvents and its interaction with an acetate anion were investigated. Characteristic spectral signatures were found for different groups of conformers and showcase the potential of using VCD spectroscopy to study reactant–catalyst interactions.

…of a chiral secondary amine borane has been studied in chloroform and acetonitrile.

April 2016
Our first paper on Matrix-VCD!

In our new paper on MI-VCD, we show that the conformation of a chiral molecule can be significantly distorted due to matrix packing effects.

… have been thought to very difficult to assign using VCD spectroscopy due to the high conformational flexiblity. We show in our Chem Comm paper that it’s actually feasible.

In collaboration with Benjamin List from the Max-Planck-Institut for Coal Research, VCD spectroscopy was used to study the transmission of stereochemical information in a chiral ion pair based catalyst. Spectral features indicative of chirality transfer from the chiral anion to the achiral cation can be correlated with the enantioselectivity of the catalyst.

Chirality as probe for intermolecular interactions is the fundamental idea of many of our research projects. In advance of the Bunsentagung, the annual meeting of the German Society for Physical Chemistry, Christian presents a review in the Bunsenmagazin.

Today, Corina joins the lab as the first PhD student. She got her MSc degree in physical organic chemistry in Wolfram Sander’s group and decided to move to the lab next door to work on interactions of chiral molecules. Welcome and good luck. 🙂

A chiral amine–borane is investigated by VCD spectroscopy. By comparison of experimental and calculated spectra, a unique VCD pattern associated with the formation of dihydrogen-bonded dimers in solution is identified. Different dihydrogen binding arrangements in solution and in solid state are characterized.

May 2014
Paper on chiral polymers in PCCP

Solvent-driven chiroptical switching of a helical chiral poly(carbodiimide): In collaboration with the group of Bruce Novak (University of Texas, Dallas), we investigate the structural changes of a chiral polymer upon change of solvent polarity and temperature and observe the flipping of polymer side groups and a shrinking of the backbone.

Solvent-effects in chiral transition metal complex: A comparison between the experimental and calculated VCD spectra proves the existence of both Δ and Λ isomers in an acetonitrile solution. However, a significant shift of the equilibrium toward the Λ diastereomer is found for the complex in dimethyl sulfoxide.

Last monday, the VCD instrument arrived savely in the basement lab in NC 05/655. A great technician from Bruker Optics installed it during this week and now it’s finally running. Research can start!

Interested in working on an exciting research project involving synthesis, experimental and theoretical IR/VCD spectroscopy? We are always looking for Bachelor and Master students and offer experiments for practical lab courses.